Pros: Good to learn with Cons: Too wide, harsh smoke, lots of paper

ATTENTION all n00bs, these are the papers for you.  If you haven’t mastered the part of rolling where you tuck the paper under and create a cylinder, ez-widers have enough paper that you can roll it like a burrito, or a rug.  The final product will have three layers of paper and probably taste terrible, but hey, you’re learning. 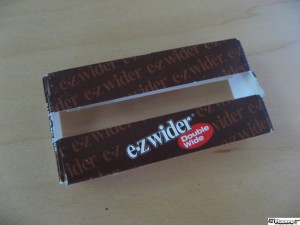 The main point of ez-widers is to be extra wide for rolling.  The problem with that is why would anyone want a rolling paper that was super thick and not very long?  There aren’t many other features that ez-widers feature.  The texture of the paper is satisfactory but not very strong, and the adhesive strip could be a little stickier.  Also since there is so much extra paper, it will be harsher smoke and have a less pleasant taste.  Almost everyone I’ve encountered rips ez-widers in half before they roll them.

I wouldn’t necessarily recommend these papers because for the same price you can get any other brand that has a better adhesive strip and less paper.  However, those who have recently begun rolling, or those who are looking for some easy practice, pick up a pack of these ez-widers and take your time rolling a few.  Soon you’ll catch on and graduate to another brand.

Coolest Ways to Roll a Joint

About six months ago I bought myself a 5-piece SharpStone grinder from ebay user HippieKid23. …